From fairy-tale palaces and epic forts to arid otherworldly deserts, Rajasthan is surely a destination of its own. In this first part we will look into the Golden City of Jaisalmer sitting on outskirts of Thar Desert, and Rajastan's capital, The Pink City of Jaipur.

Rajasthan is the largest state in India by area. Historically, it used to be territory of Princely states, relatively independent entities where every city had its ruler - the prince. Until this very day most of these cities still have their splendid palaces and the prices who inhabit them. Rajasthan is literally the Land of the Kings. It is home to the chivalrous Rajputs, and its battle-scarred heritage has bestowed legacies of pride and tradition.
See full map

Jaisalmer, also known as The Golden City, is remotest but perhaps most stunning location in Rajastan. Situated in the very east of the state (and of the India itself), it neigbours the Thar Desert (or Great Indian Desert), on other side of which is Pakistan. The city is dominated by the Jaisalmer Fort, also known as Sonar Qila (Golden Fort). Unlike most forts in India, the Jaisalmer Fort is a living fort. There are shops, hotels and age old havelis (homes) inside the fort area where families have lived for generations. But perhaps the most interesting in the fort are the centuries old Jain temples - some of the greatest Jain temples in all of India.

Jaipur is the largest city in Rajasthan and was built in the eighteenth century by Sawai Jai Singh as India's first planned city. Jaipur is often called the Pink City in reference to its distinctly coloured buildings, which were originally painted this color to imitate the red sandstone architecture of Mughal cities. At the city’s heart, the City Palace continues to house the former royal family; the Jantar Mantar, the royal observatory, maintains a heavenly aspect; and the honeycomb Hawa Mahal gazes on the bazaar below. And just out of sight, in the arid hill country surrounding the city, is the fairy-tale grandeur of Amber Fort, Jaipur’s star attraction.

Roadside shop as seen from the bus.

Entry gate into the city of Jaisalmer.

Jaisalmer is named "The Golden city" and used to be independent city-state.

The town stands on a ridge of yellowish sandstone, crowned by a fort.

The fort houses some of the finest Jain temples in all of India.

Jainism, traditionally known as Jain Dharma, is an ancient Indian religion belonging to the śramaṇa tradition.

The central tenet of Jainism is non-violence and love towards all living beings.

With 6-7 million followers, Jainism is smaller than many other major world religions.

Walls of the temples are decorated by animal & human figures, carved in famous Dilwara style.

There is number of Jain Temples in the fort build in 12th to 15th century.

Jain temples from outside.

Inside the fort are shops swaddled in bright embroideries, a royal palace and numerous businesses.

Beneath the ramparts the narrow streets of the old city conceal magnificent havelis, all carved from the same golden-honey sandstone as the fort.

Wine shop (with no wine) east of Jaisalmer, on the outskirts of Thar Desert.

East of Jaisalmer Thar Desert starts - large, arid region in the northwestern part of the Indian subcontinent that forms a natural boundary between India and Pakistan.

We embark towards something that looks like a sandstorm.

Train journey between Jaisalmer and Jaipur.

Main thoroughfare in Jaipur, known as The Pink City.

Jantar Mantar in Jaipur is a collection of nineteen architectural astronomical instruments. It features the world's largest stone sundial.

It was built by the Rajput king Sawai Jai Singh, and completed in 1734 CE.

Backstreets of the Pink City.

In the second part of our travels through majestic arid Rajasthan we will visit Jodhpur, a majestic blue city with the largest fort in India, and southern beauty Udaipur, also known as Venice of India. 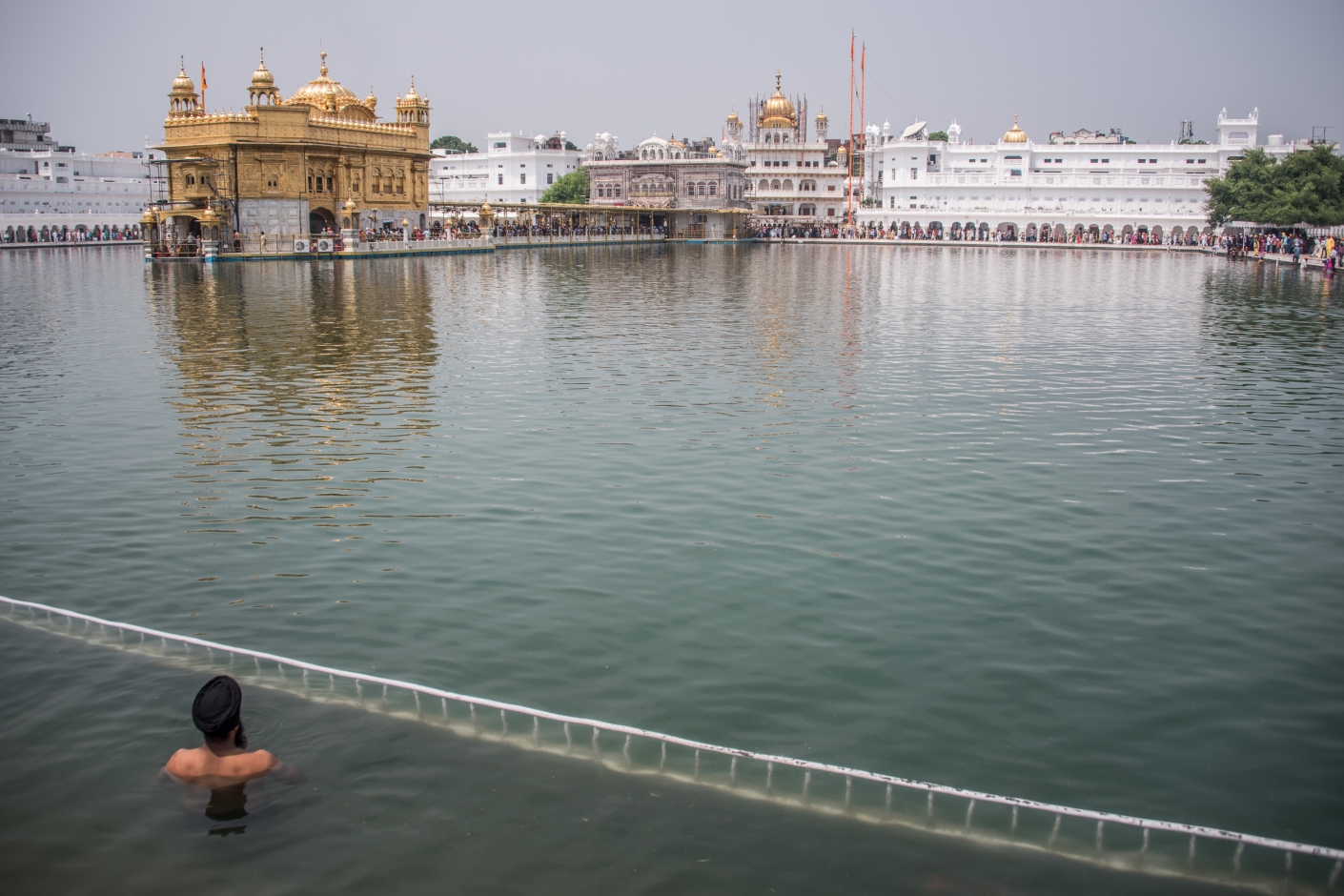 The Golden Temple of Amrtisar

Harmandir Sahib, Sri Darbar Sahib or simply the Golden Temple is the holiest Gurdwara of Sikhism, located in the city of Amritsar, Punjab, India. Over 100,000 people visit daily this Sikh's holiest temple shrine daily for worship and free meal in the community kitchen.