Soon we decided to leave beyond large and loud Indian cities and urban areas and head towards our first main destination - the Indian Himalayas. Firs stop from Chandigarh was the state's capital, lovely mountain town Shimla spread over 5 hills. Once much important British hill station still keeps strong colonial feel. Shimla also serves as a center and starting point to any further travel into the Himalayas.
See full map

We decided to take remote and rarely visited path through regions of Kinnaur, Spiti and Lahaul. These regions were opened to non-Indian visitors only few years ago, and still require special permits to visit. Yet once you embark you are guaranteed to visit places unlike anywhere else. First day of the journey you pass through lush green Shimla region, full of apple orchards, which are growing apples for the whole of India. Yet on the day 2 green slowly but surely fades away, and as you enter Kinnaur you are entering arid high-mountain desert. With similar climate as neighboring Tibet, it very rarely rains in Kinnaur or Spiti. As we're passing through the only motorable road in whole region, we are often delayed with landslides and roadblocks. Yet ultimately we get to the confluence of Spiti and Sutlej River, just few kilometers from the Tibetan frontier. From here we take the way north, towards the Spiti valley, which, with its brother region Lahaul, will be introduced in the next chapter.

While we visited Dharamshala few weeks later on the way back down from Himalayas, as it is located in similar settings as aforementioned places it is rightfully included in this chapter. Dharamshala is the seat of Tibetan Government in exile, and His Holiness Dalai Lama. His holiness as well as thousand of other Tibetans who were forced to emigrate of out Tibet found their new home in Dharamshala and surrounding villages. In the present still hundreds are coming every year, often walking for weeks or months dangerous roads through next-to-impassable Himalayan passes. Here they have a chance for better life: life with human rights and freedom of their religion. Yet they dare to dream and fight for the most important: Liberation of their homeland and so they can one day return.

Dharamshala, a lovely mountain town, is the seat of Dalai Lama and the Tibetian Government in Exile.

The Tibetian government is actually situated in villiage McLeod Ganj, just above the town of Dharamshala.

Steep hill above Dharamshala is called Triund and lies at 2100m above sea level.

Goats on the way to Triund.

Since 2009 over 145 Tibetians self-immolated in China as part of a peaceful fight for freedom of TIbet, freedom of religion and human rights. All their names and images are displayed in Tibetian museum in Dharamshala.

The complex where Dalai Lama resides consists of offices of whole Tibetian Government in Exile, as well as huge monastery with hundreds of monks.

The town centre of McLeod Ganj.

As seen from a bus from Chandigarh to Manali.

Panorama of Shimla, the moutainous capital of Himalchal Pradesh spread over 5 hills.

The Ridge, cental square of shimla. Once one of most important British hill-stations, shimla still keeps a british feel with lot of colonial buildings and major church in the middle.

The valleys and hills around Shimla are full of apple orchads. Most apples in the whole of India come from this area.

Town hosting one of the few skiing areals in India. There is not much to do in the summer through.

The more East (towards the Tibet), the less green the country gets.

Roads in Kinnaur, Lahaul and Spiti areas of Himalchal are very oftem cut directly into the rock like this. This is where they begin.

One of many water plants on Stulej River.

Kinnaur is noticeably less green then Shimla district. It is a buffer zone between lush lowlands and dry highlands.

One of the few settlements in Kinnaur Valley.

Worker next to a cable car that was used until recently to move material over the river.

Roadblock due to landfall. These happen regulary every day on various parts of Kinnaur-Spiti-Lahaul road and always cause several hour delays for any travellers.

Workers going home after hard work cleaing up the landfall.

Conlfuence of Sutlej and Spiti Rivers. Spiti (the grey one) comes from the north from the Spiti Valley. Sutlej (the yellow one) comes from the east from Shipki-La mountain pass that leads to Tibet. While tibet is only few kilometers up the river from here, and road through the pass has existed for centuries, the China and India keep all their borders closed so its impossible to cross.

The town of Leo with Apple orchads, fields of green in the desert. The river left is seasonal and only flows in Monsoon season.

Lower Spiti Valley still belongs to Kinnaur district, through it is already an arid high-altitude desert.

The largest settlement in Lower Spiti Valley is a lovely Buddhist villiage.

Field of green in the mountains of desert.

Important Lama (buddhist teacher) gives an empowerement in this mountainious monastery. People gathered to attend from many villiages around as well as from the cities down south 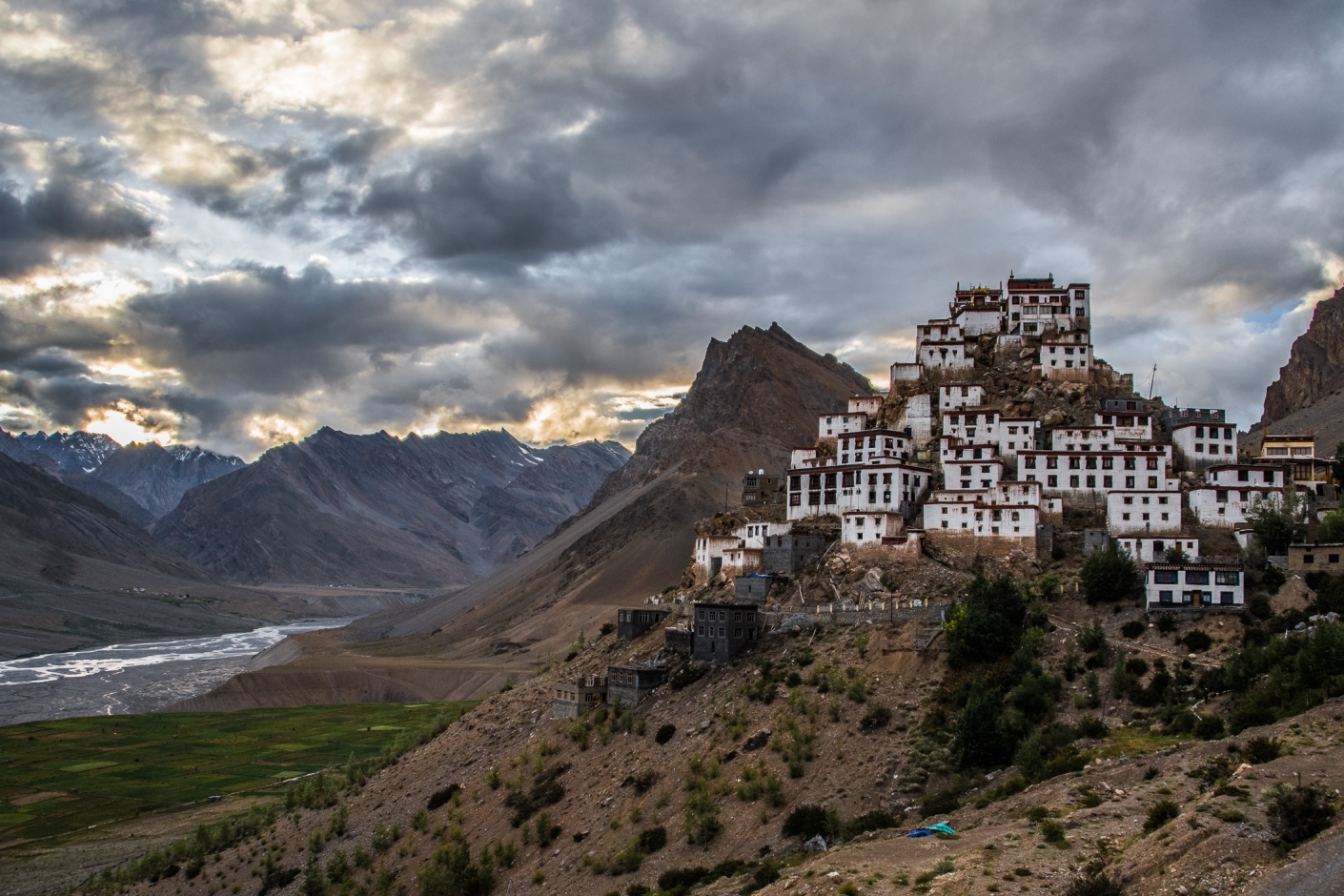 The higher, more remote and more tranquil part of the Himalchal Pradesh - the valleys of Lahaul and Spiti. Beautiful high altitude deserts consisting of deep valleys with even taller peaks. Welcome to High Himalayas.

Lahaul and Spiti. next chapter.

The two capitals, yet unlikely pairing. The contrast between aged Delhi, the National Capital of India, and its busiest and largest city. VS Union territory Chandigarh, 250km north, the Capital of Haryana and Punjab, modern and India's only planned city developed by Le Corbusier.